A downloadable Arcade Platformer for Windows and Linux

2tinycowboys is an action-packed western-themed arcade multi-scrolling platformer in 2D, with huge variety, in which you take the role of one of 9 different cowboys, each with his/her own play-style. It has up to 4 players split-screen multiplayer available and quirky game-play and characters

Clint: Does not get bitten by snakes.
Esmaralda: Does not get bitten by spiders.
Felipe: Has a short-sword, rather than a knife (Longer stab-range).
Ma' Belle: Able to take two arrows, before dying.
Mercedes: Gets 2 jump-boots, rather than one, on pickup.
Rose: Jumps higher than everyone else.
Santiago: Fires faster than the others.
Zeke: Has penetrating bullets that will kill all enemies in one shot.
Zorra: Double jump and faster than the rest. (Cannot pick up other weapons)

Ndyan - Bow: If quick enough, you can shoot his arrows.
Ndyan - Spear: This guy takes 2 bullets before going down. Long reach in melee, but no ranged weapons.
Ndyan - Tomahawk: Keep track of his bounce and beware, it will take you 4 bullets to kill him off for good.
Sherif && Sherif Twin: Fast draw, quick-shooter. Careful with shooting hitting their bullets. The sherif and his Twin will take 3 shots each to kill. Killing one will resurrect the other.
Robot: Made of indestructible material and fires lasers. Bullets will ricochet right off of these guys; Your best bet is to jump over him.
Zombies: These undead cowboys can take 5 bullets before going down, becoming slower by each hit. Stabbing will instantly kill them, however.
Snakes: Sometimes easy to spot, sometimes hidden in the undergrowth. Their venomous bite will poison the player, giving them one minute to find a anti-venom.

Spiders & Bats: These will stun the player for a few seconds. If however the player has been bitten by a snake previous, then they will be instantly killed.
Ooze: This will slow you down for a few seconds, while decreasing your jump.
Tentacle: These will slow you down.
Boulders: On certain levels there are boulders coming down from the mountains above. You can stab these, or try to jump them, else instant death.
Vultures: These will carry off with you, enemies as well as gold-bars.

Cavalry:
Shooting the bell on any level (difficulty-level Medium/Hard will spawn the Cavalry.)
Shot-gun Bill: A bit slow, but fires scattering bullets.
Long-Range Joe: Slow reload, but far reaching bullets.
Pete the Pistoleer: Fires his pistol at a rapid rate.
Sarge: Boosts morale of the others. (Hard)
Noah the Trumpeter: As long as Pete is alive, whenever there are less than 50% of Cavalry remaining, they will respawn. (Hard)

Gold-bars: These are what you want. Get all 12 to win the level.
Hats: Extra lives.
Boots: Double-jump.
Anti-venom: Negates snake-bite.
Ammo: More ammunition for your guns.

The Shotgun: Short range, slow speed, fires in five different angles in front of the shooter, thus making it ideal for taking down enemies on ledges in front of you. Fires pellets, rather than bullets.
Ammo-capacity = 5

The Rifle: Long range, fast speed, fires a half fist-sized bullet, penetrating any and all enemies (except for Zombies, which are spongy by nature), killing them instantly.
Ammo-capacity = 3

The different difficulty levels alter the game in the following ways:

Medium: No robots, no tentacles or boulders. Vultures don't pick up Tomahawk Ndyan or Snakes. 10 Goldbars required to win.

Hard: Your default game-mode, 2tinycowboys as it was intended. Challenging, but fun; Especially in multiplayer. But do feel free to pick any level of challenge to get acquainted with the game, before advancing to this. 2tinycowboys is about having fun, for everyone. 12 Goldbars required to win. 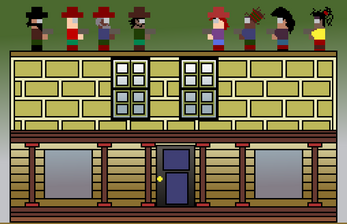 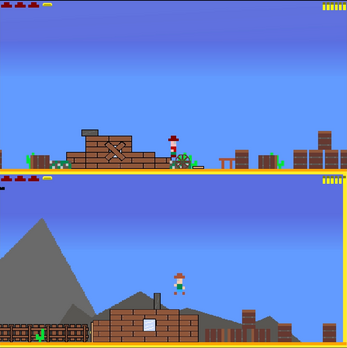